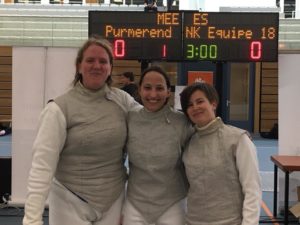 On Saturday morning, Ellen, Lili and me (Ashley) participated in women’s foil. It was a bit unsure if we could join, but luckily we managed it last minute. And quite successfully!

We had to get up early to be in Purmerend on time. Unfortunately there were only 4 teams participating in women’s foil. Other teams were from Schermcentrum Amsterdam, Hollandschermen and Scaramouche.

Our first opponents were the women of HollandSchermen (Alkmaar and Haarlem). One of the strongest clubs in the Netherlands. We were not put off by that name, but rather started very positively. At the beginning of the bout we were not still as sharp as possible, but eventually we won this match with 45-30. In the finals, we had to take on the very strong ladies of Schermcentrum Amsterdam (SCA). This team consisted of the numbers 1, 2 and 3 of the National Ranking, and a fencer that won herself a bronze medal during the JWK. We as team knew it would be nearly impossible to win this match. But at least we didn’t want to lose as bad as the team that stood against SCA in the finals last year (45-7). Therefore we set ourselves 3 goals: 1. With more than 7 points we would be satisfied. 2. with more than 14 points we would be really happy. Why 14? Well, it was the score in the half finals between SCA and Scaramouche. And number 3? To have loads of fun!

We achieved all our goals! We managed to score 16 points! Lili was ON FIRE and scored a mere 12(!) points. And fun was had as well. Despite only 4 teams participating, we are very happy with our silver medal. 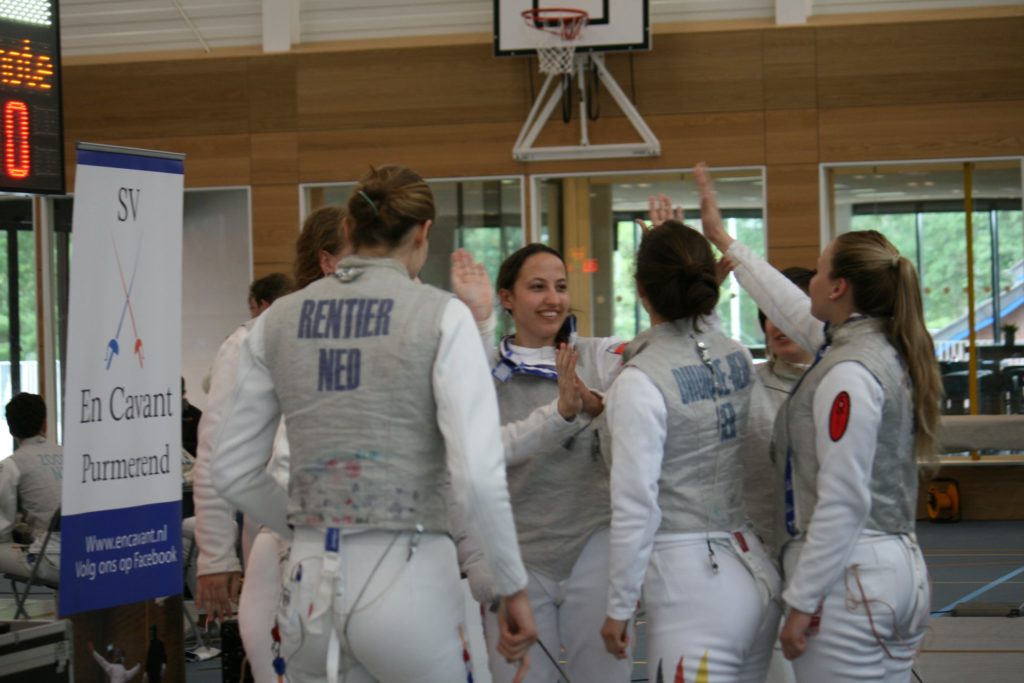 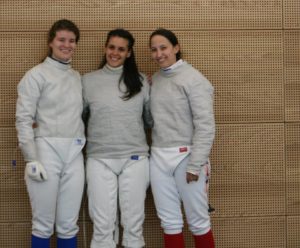 Our women’s sabre equipe consisted of Nienke, Beatriz and Ellen, which fenced on every weapon. Our equipe was placed 6th and had to fence against Delft Fencing Club, which was placed 3rd. With an equipe consisting of two new fencers and an experienced fencer on a different weapon, our equipe began the quarter finals, supported by coaches Danny and Nico. As no one in our team managed to get grip on the two experienced members of DFC, our women unfortunately had to bend the knee for the ladies of DFC, with a score of 45-36. This score was much better than expected, though.

With a positive feeling due to this result, we moved on to the next bout, against PSV Schermen from Eindhoven. PSV had some young fencers in their equipe, but they were quite the match for our fencers. Unfortunately, they won with 45-40. As we lost both bouts, we ended 7th and last.
But despite this last place, the team can proudly look back on their first competition together. They performed to ability and didn’t make an easy win for the opponents. Our women’s sabre team fenced well and left a good impression. 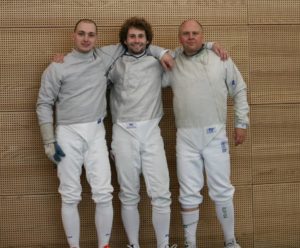 As all our equipe members had a reasonably or very good positioning on the ranking list, we were placed second for the competition. This turned out to be a great advantage, since we could avoid fencing the strongest opponent till the final. This also became clear from the first bout the equipe had to fence. We fenced against Schermcentrum Noord, which was placed 7th, and they could not match our equipe’s speed, resulting in a large head start for our team. After the first two bouts we were in front with 10-0, which was extended till 45-19, eventually.

The next encouter and half final was against ASSV Esprit. This is one of the other student fencing clubs, and members of their equipe fence on a much higher level. This gave us much more problems, leading to us lagging 2 points behind after 3 bouts. Furtunately, Danny regained the lead in the 4th bout, and after that we didn’t give it away. This resulted in a 45-38 win and a place in the finals.

The final was quite a bit more complicated and so it appeared as well. In the first bout, Nico right away lost 5-0 against his nemesis and Dutch champion Robbert Goossens. After this, we barely could close the gap, and despite all good attempts, we eventually had to bend the knee with a 45-22 loss. In this years NK Equipe, 2nd place was the highest we could get. 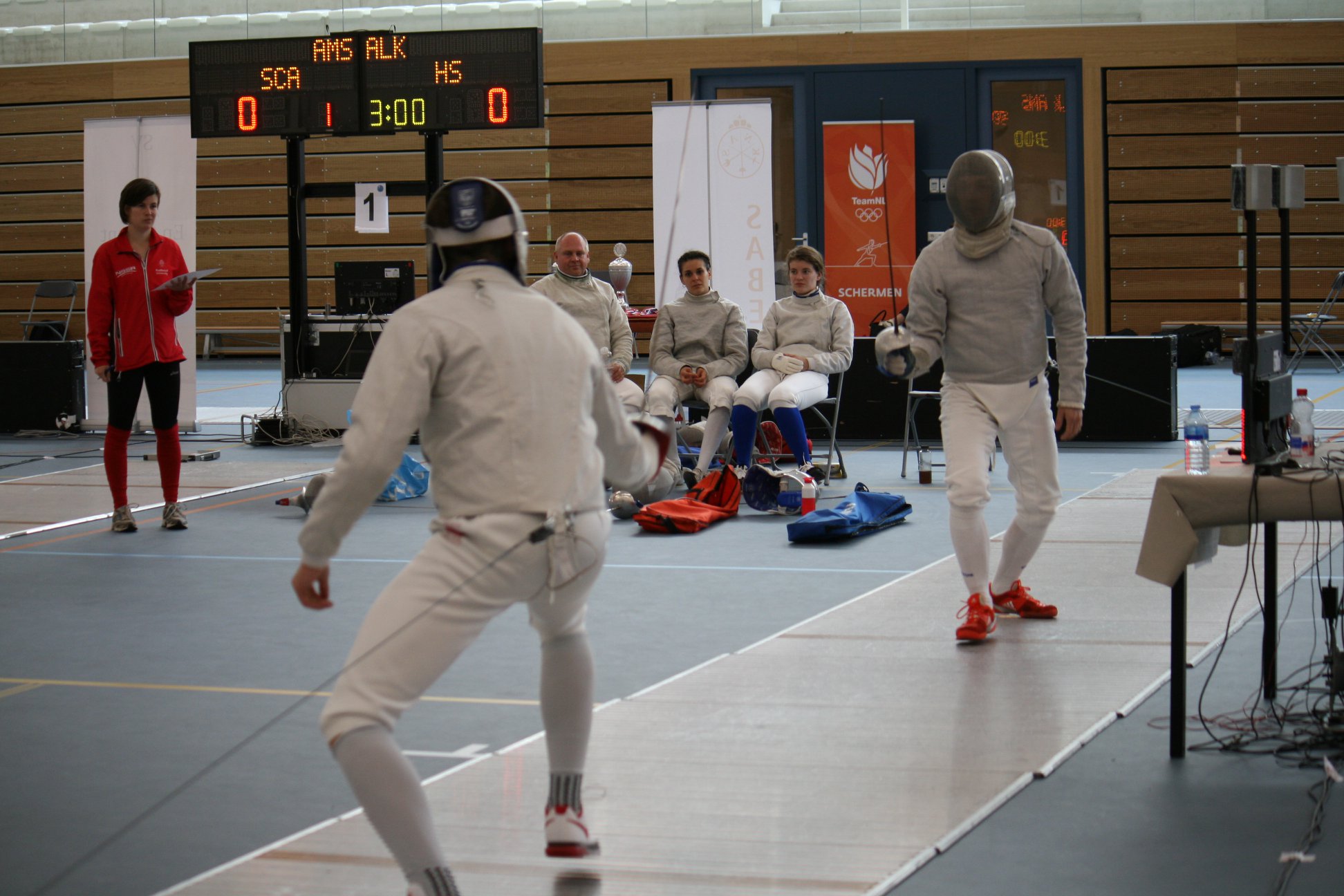 Bright and early in the morning, we left for Purmerend. René, Gijs and Laurens in one car, without any high expectations but a lot of excitement for the tournament. Placed 13th, we knew it would not be a podium spot, but we decided to go and enjoy fencing as much as we could.

Our second bout was against Schermcentrum Amsterdam. Originally placed 5th, this wouldn’t be much easier than the first bout. We had a very good start and were ahead with 7 points after 4 bouts. Unfortunately, our opponents overtook us and we lost with 32-45.

The third bout we had to fence against Hollandschermen’s young equipe. This was a very exciting bout, in which both teams took the lead multiple times. Finally, Laurens made it a 45-43 win for us. Our first win of the day after two lost matches, so this was very welcome.

The final bout was against the gentlemen of the KMSV. Strengtened by our last victory, we started this bout with a positive feeling. Just like the last bout, both equipes took the lead, alternating. Half way through the match, we took our chance to increase the gap and with a lot of nerve wrecking perseverence, took the lead till the end. This last bout ended with a 45-39 win, resulting in a 13th place for the tournament.

We are very content with our 13th place. Everyone fenced well and enjoyed. There were some very nice bouts and we travelled back to Nijmegen very satisfied. 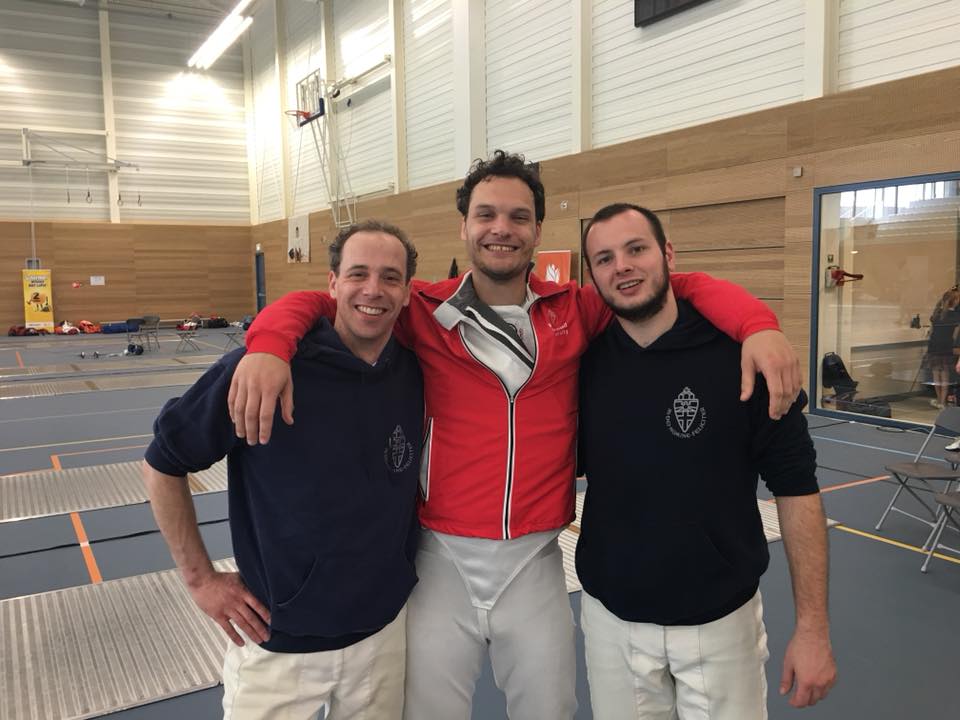 The DQ men’s epee equipe, with from left to right Gijs, Laurens and René

Our equipes worked hard to achieve a good result. Eventually, this resulted in two 2nd places, a 5th place, a 7th place and a 13th place. Together, these results made us come second in the ranking for all fencing clubs! Thanks to everybody in the equipes and congratulations with the result!