In light of the recent developments with respect to the SARS-CoV-2 virus in The Netherlands, we have decided to cancel the Keizer Karel Tournament for 2020. The organization feels it cannot guarantee the safety of all involved and cannot organize the tournament, in a way that is expected from us. We hope that we can organize a nice competition next season.

On October 20th 2019 Don Quichote organizes the 2nd Keizer Karel tournament at the Radboud Sports center in Nijmegen. This tournament is a competition for the Dutch ranking. The invitation can be found here.

END_OF_DOCUMENT_TOKEN_TO_BE_REPLACED

Our trainers Danny and Nico have been participating in the fencing master course for a level 3 certification for almost two years now. After two years of hard work, the exam was held on Saturday June 29th for both. The exam started early at 9:00 am with a one-hour long theoretical exam about the rules and the terminology within fencing. After that, Danny and Nico had to wait almost 6 hours to be the last two participants to take the practical exam. This practical exam consisted of giving a 20-minute lesson to one of their own students. During this lesson the examination committee assessed them. In this case Béla participated as a student for the individual lessons of Danny and Nico.

END_OF_DOCUMENT_TOKEN_TO_BE_REPLACED

On the weekend of May 11 and 12 Don Quichote entered the Dutch Championships for teams in Apeldoorn. This year our club managed to delegate teams in the categories men’s sabre on Saturday and men’s epee on Sunday.

In the men’s sabre event on Saturday Don Quichote was represented by Béla, Tim and two of our coaches, Danny and Nico. Because only five teams participated, a single pool was fenced. That meant that the team had to fence against all other teams to determine who would claim the Dutch title. First our team had to compete against the team of Delft Fencing Club, with former Dutch champion Teun Plantinga in the ranks. After a few exciting bouts, at the start of the 7th game the score is 35-34 for the team from Delft. With a score of 6-1, Nico managed to bend the score to 40-36 in favor of Don Quichote and Béla could finish the game. He did this with 5-0 and our team eventually wins with 45-36.

The second match was against ASSV Esprit, the student fencing club from Amsterdam. The Nijmegen team started the match well and immediately build up a 10-5 lead after the first two matches. The size of the lead fluctuated a bit, but the lead itself was never really at stake. With a lead of 40-33, Béla finished the match with 5-1 to a 45-34 win. After this match our team had a break.

After the break a match against the reigning Dutch champion from Apeldoorn, Surtout, was up. The team from Apeldoorn was aggravated by an earlier loss against Schermcentrum Amsterdam and it showed. The Apeldoorn teamstarted ferociously and took a 15-3 lead after the first 3 bouts. In the second part, Don Quichote managed to get into the game a bit more through a 5-5 for Nico against the strong-fencing Dirk-Jan Bouwman, but the real fireworks came from Béla, who managed to make 14-5 against the always tricky Mike Goedhart. With this our team entered the third part with a 30-23 deficit. Unfortunately our team was unable to keep the strong game going and in the last part the difference in strength became clear. Don Quichote lost this match with 45-27.

The last match was against the team of Schermcentrum Amsterdam, who had already beaten Surtout. Due to the progress of all matches so far, with Don Quichote winning, the home team would still be Dutch champion and our team had a (small) chance of a second place. This first fact got the crowd behind Don Quichote and the second fact made our team go in guns blazing and after the first part of the match it was 15-14 at our disadvantage. Tim seemed to rise above himself and managed to make four hits against the strong Hungarian Miklos Farkas. Nico, however, could have provided the lead in the following bout, but he was unable to achieve this. Good work from Béla kept the damage limited and Don Quichote trailed 30-27 at the end of the second part. Nico was not fencing at its strongest in the 8th match, which meant that Béla was faced with the difficult task of making up for a 40-32 deficit in the last match. This assignment turned out to be too hard and after a good 6-5 by Béla, Don Quichote had lost 45-38. Don Quichote ended up in 3rd place.

On Sunday Don Quichote participated with Laurens, René and Gijs in the men’s epee event and because 15 teams participated, they fenced a table of 16. Because our team was placed tenth, the first match was against AEW, who where placed seventh. It was an exciting match from the start and at the end of the second part our team was 28-23 behind. This was straightened out by Gijs in the 7th match with a 12-5 to a 35-33 lead. René then had a hard time with Edwin Treffers, which resulted in our team being down 38-36 before the start of the final bout. In the final bout Laurens could not get a grip on his opponent and the match was eventually lost with 45-38, so Don Quichote had to compete for places 9-15.

In this part of the tournament our team met De Drie Musketiers for a Nijmegen derby. After a strong start our team was in a good 15-9 lead after the first part. In the second part, Gijs, Laurens and René managed to expand this to a 30-15 lead and this lead never came under serious attack in the final three bouts. Eventually the match was won with 45-31.

After this win Fencing Club Almere was the opponent for the match for places 9-12. This difficult opponent turned it into an exciting match, with a lead of 15-13 built up by our team in the first part. In the second part, Christian Jelders in particular turned out to present a problem for the fencers of Don Quichote and it was 30-26 for the club from Almere after the second part. At the start of the last bout, the score stood at 40-35 for Almere. Laurens tried to wrest control of the game back into our favor and did very well against Christian Jelders, but he was undone by a late discoveryof a broken point. The game was eventually lost with 45-42. For the 11th place Don Quichote had to take on De Vrijbuiters from Gouda. In this match, none of our fencers really managed to get a grip on the opponent and it was lost 45-29. Don Quichote ended up in a 12th place.

In this blog I will show which social media outlets and old fashioned web sites I follow to keep mup with developments are taking place in modern fencing. Most of these media are related to sabre fencing, but I also follow a few that are more generally related to fencing. END_OF_DOCUMENT_TOKEN_TO_BE_REPLACED

Last Sunday Don Quichote organized the 1st Keizer Karel tournament in hall 1 of the Radboud sports center. With the help of Leon Paul Germany we organized a nice tournament.

On Saturday evening at half past six, Leon Paul Germany reached the sports center in a lorry with 12 pistes. After opening the gate Jan, Danny, Sam, Nienke, David, Rieke and Lucas set up the hall for the tournament in about one and a half hours. That looks something like this.

END_OF_DOCUMENT_TOKEN_TO_BE_REPLACED 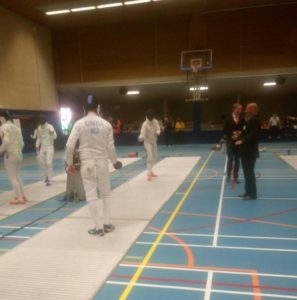 Laurens in his bout against Buzatti

Sunday September 16th the 31th Koning Willem II tournament was fenced in Tilburg. This tournament has been one of the first tournaments of the season for years and is always well attended, also by our southern neighbors. Because a B-poule is also fenced, the tournament is freely accessible to all levels and each participant has a lot of fencing. Mark, René and Laurens traveled to Tilburg on behalf of Don Quichote. END_OF_DOCUMENT_TOKEN_TO_BE_REPLACED